Sheffield Tigers endured a hard day at the office as league leaders Hull came to Dore Moor and put in a controlled and competent textbook display of rugby. Tigers stuck to their task throughout the game, but the visitors’ power and experience proved decisive in the end as they consolidated their top spot in National 2 North as the season enters its second stage.

The opening try for Hull arrived after seven minutes. Tigers slightly overthrew a line-out in their own half and the visitors gathered and moved the ball to left wing Michael Adlard and he made ground into the 22. They recycled to send centre Duell Trueman over the line in the left corner. Simon Humberstone duly converted. Then ten minutes later, powerful tighthead Tipiloma Kivalu exerted pressure at a Tigers central scrum to secure more turnover ball for Hull. Play moved both left and right before Humberstone chipped ahead to the right corner and Keane Naylor gathered and touched down. This time Humberstone struck a post with his conversion. Hull continued to do the basics well and were rewarded with a third try on the half hour mark, when a series of drives close to the try line finished with hooker Michael Jobling running in on the blind side. Humberstone converted to make it 19-0.
Tigers’ heads could have dropped at this stage, but they soon were back in the game, scoring via a first phase play. A line-out was won on the halfway line, Mark Ireland picked up a low pass and fed centre Sam Wager who dummied through the Hull defence. Robbie Davidson made a supporting run and received a well timed pass to go over in the left-hand corner amidst loud cheering. Ireland duly converted. Spurred on by this Tigers remained on the attack and were rewarded on 35 minutes when a Hull defender strayed off-side. Ireland slotted the penalty to leave the half time deficit at 10-19. 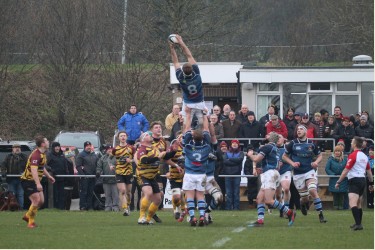 As the sun appeared for the second half most present felt the next score would be vital in determining the outcome of the game. And it was Hull who obtained it in the 51st minute. They forced a series of breakdown penalties and earned a five metre line-out on the left side. A catch and drive move resulted in tighthead prop Ben Boothman bundling over in the corner and Humberstone extended the lead with an expert conversion. For the next 20 minutes play was very even with neither side being able to earn territorial advantage. Tigers had plenty of possession but were turned over at times at the breakdown to the dissatisfaction of their supporters, who felt that the visitors were at the margins of legality at times. But it was Hull who were to find the last score of the game. In a manner similar to their bonus point try they forced a five metre line-out five minutes from time. Once they had secured the ball Hull sucked in the Tigers defence and then moved to the blindside where full back Reece Dean was able to steal over the line unchallenged. Humberstone was again on target with the conversion.

The last minutes of the game saw Tigers encamped in the visitors’ 22, driving forward looking for a second try with Otis Floyd and his forwards all prominent. However Hull repelled the attacks to complete a 33-10 win. Tigers remain in ninth place in the league table, with a game in hand on the three clubs above them, and now turn attentions to another challenge next Saturday when they visit second placed Sedgley Park in north Manchester.

Tigers Director of Rugby Jack Howieson reflected on the game. "Basically they won the contest due to a well functioning and strong scrum and line-out. I'm not too disappointed at the outcome, especially as when we had the ball in hand we looked dangerous and certainly matched them in that aspect. It was a shame to lose Curtis Wilson on the morning of the match due to a tight calf injury, but there is plenty of crucial rugby to look forward to in the coming weeks, so we felt it was the right call. "